I just got back a few days ago from one of the most exciting conferences in the edtech world. I had the chance to go to ISTE 2017 in San Antonio, Texas. Because I am a planner, I scoured the internet and all Social Media for tips for an ISTE Newbie like myself. There were many good tips but here are a few that I wish someone had told me before going to ISTE17. I hope these will help you prepare for ISTE18 in Chicago. 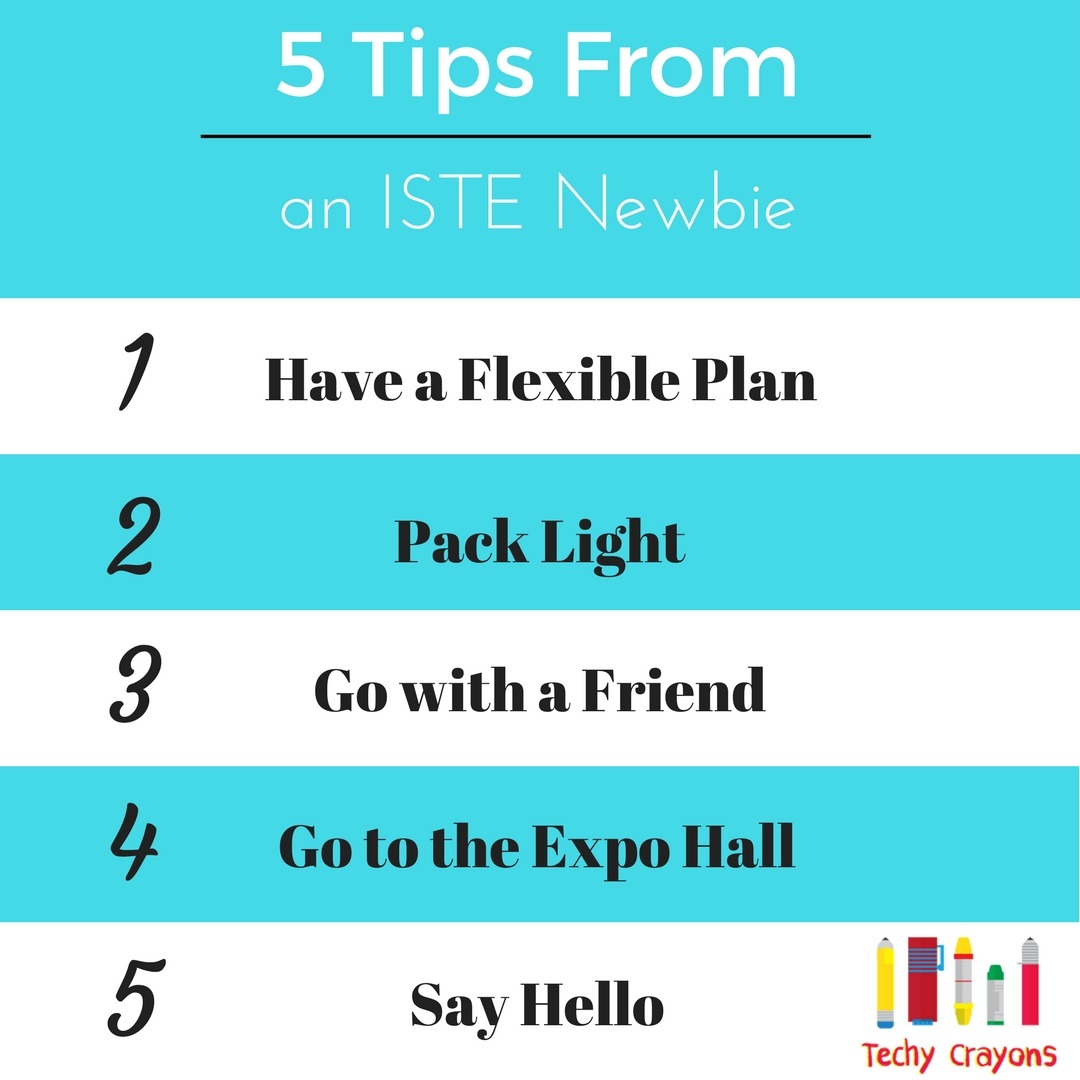 Tip 1: Have a Flexible Plan

ISTE is it’s own type of conference. It is the definition of asynchronous! There is so much going on at one time that unless you walk around with someone the entire time, everyone will have a very different experience. There are many different types of sessions, including BYOD, panels, interactive sessions, and more. You need to register for the BYOD sessions before getting to ISTE because these sessions have limited space and you need a ticket to be guaranteed a spot. You are able to wait in line to see if they let you in but if the session is very popular then you might not get in. So we learned on the first day, we needed to be Flexible. Once the sessions were emailed out to attendees, I made a Google Sheet with my plan of attack. I did this in March or April. 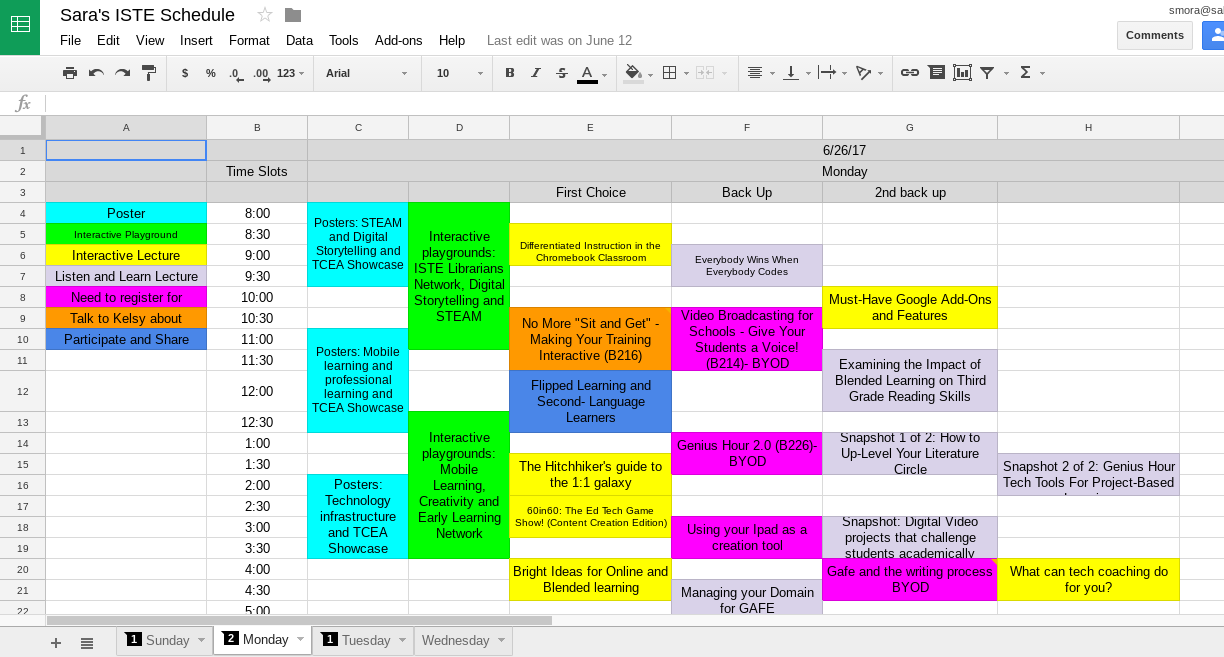 When the ISTE app came out, I added my first choice sessions to the app agenda so that it’d be easier to keep track of during the actual conference. This year, the app had an added GPS feature but I couldn’t get it to work on my phone.

Also, be watching Social Media for sessions that you missed or for meet ups that you want to participate in. I found an extra session with BrainPop by checking their Twitter. We learned a lot about the new features of BrainPop that I will share in a different post. I’m in the process of becoming a Certified BrainPop Educator so once I finish that I will share more about BrainPop.

I made a huge mistake going to ISTE with carry-on only. I did this for a specific reason. I was flying from San Antonio to Denver and then had to change airlines to travel to Philadelphia to meet my family for our family trip. Last year, the airline lost our luggage when our flight got canceled. (It’s that one airline that has gotten horrible press for kicking people off the plane…). But I wish I had brought fewer shirts because the vendors in the Expo Hall love to give away T-shirts (and bags). I got 3 different shirts and almost got another one from SeeSaw. 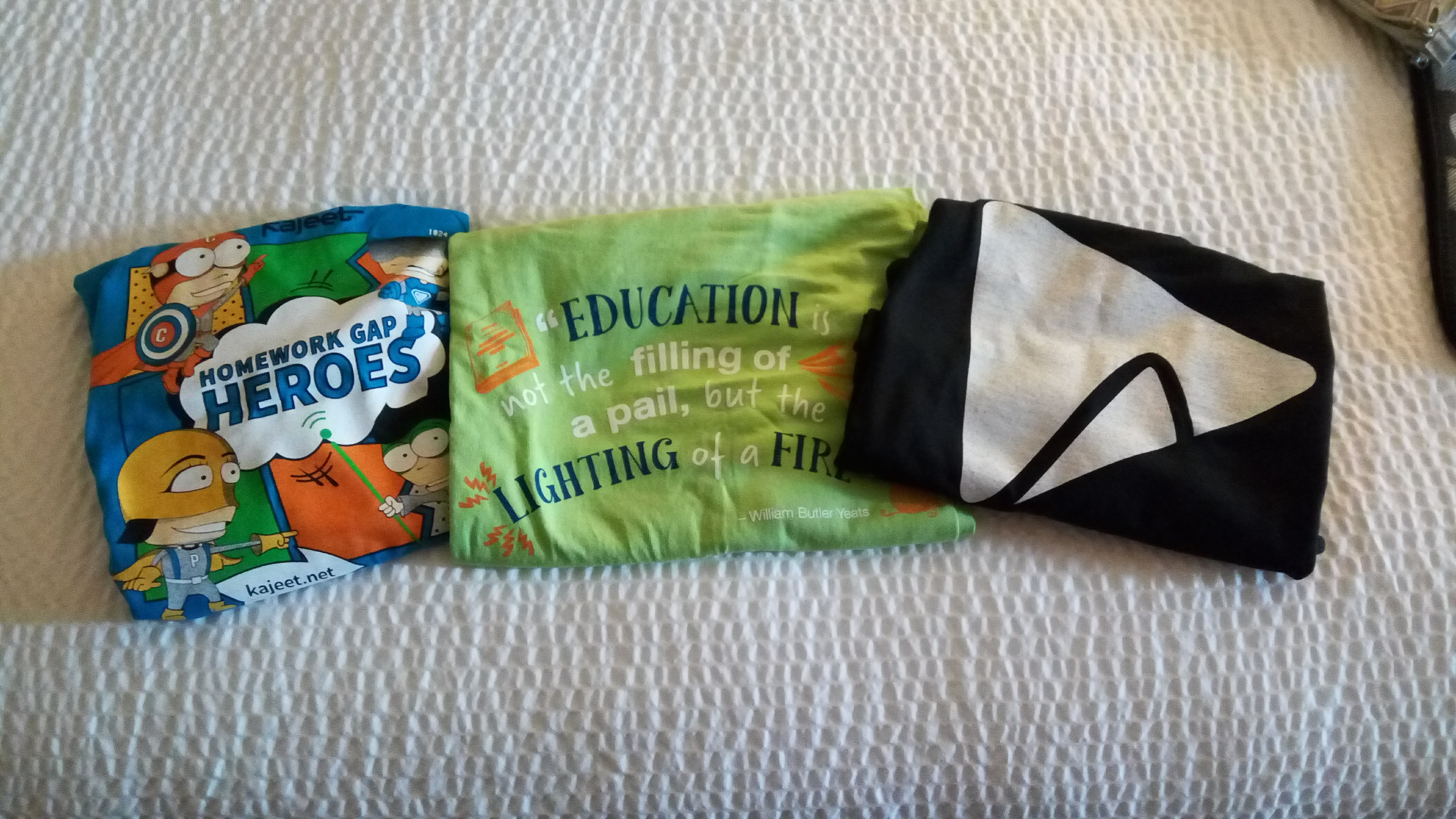 If you are XL, this will be your sauce because it seemed like they all had XL so as not to have to deal with having multiple sizes. This picture doesn’t include the actual ISTE shirt that I bought later in the week. I do recommend that you buy your shirt or sweater earlier in the week because we didn’t and when we came back on Tuesday there were slim pickins! 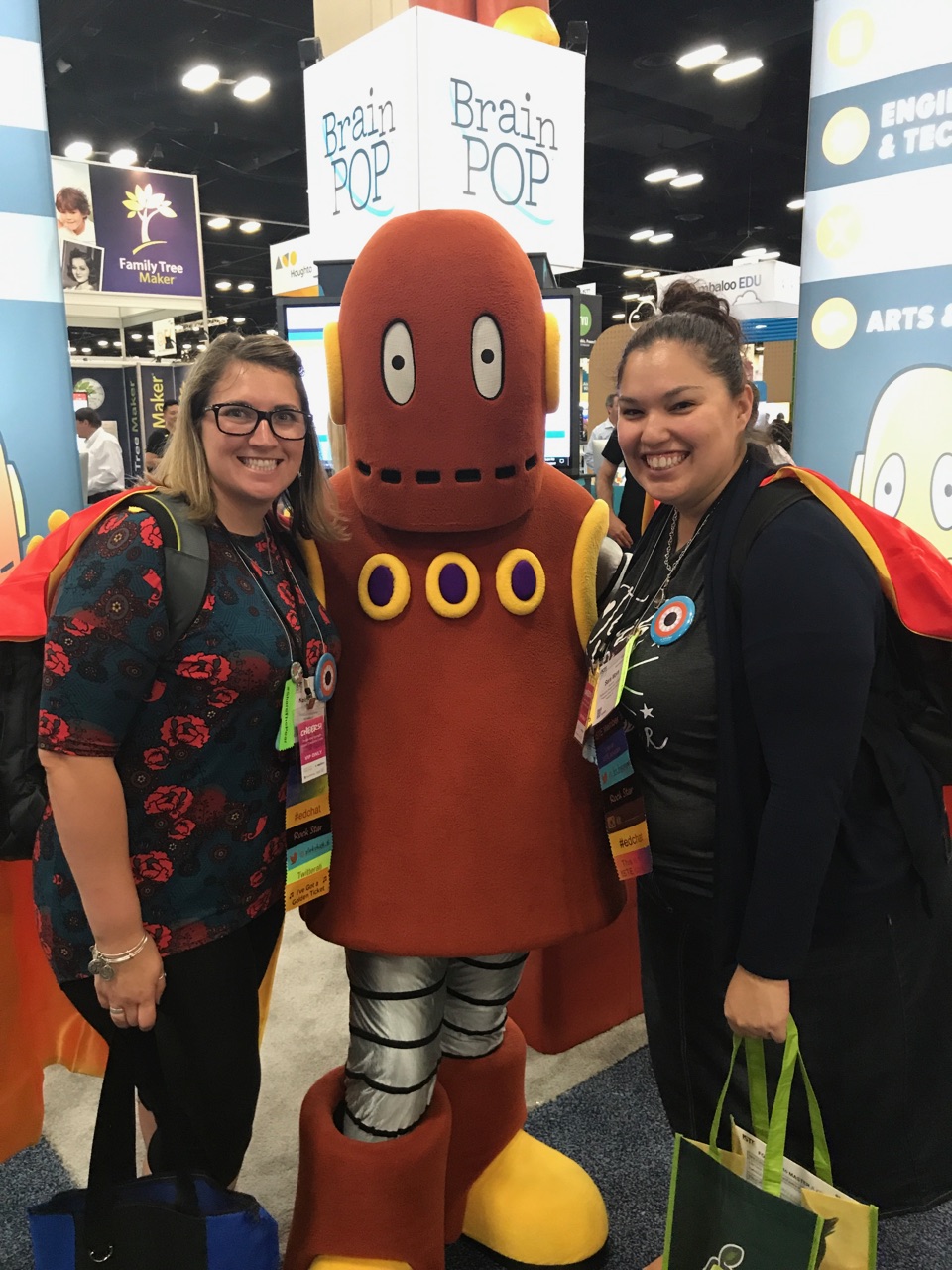 It was so awesome to go with a friend because we could separate and share experiences or go to the same sessions and both benefit from being able to remind each other of what happened in that session. I find it easier to go to a new place when I have someone familiar with me. It makes it less overwhelming. It was also nice to talk things through with someone else. Kelsy was getting really frustrated with not getting into the sessions we wanted to get into. We recommend that if there is something you want to do, be in line 30 mins before. To get into the pre-sessions on Sunday, you need to be in line an hour and a half before the session starts. Kelsy suggested that newbies travel with a friend that has already experienced ISTE so as to have help to navigate the conference.

We had the most fun at the Expo Hall. We got to meet Moby from BrainPop. We did Yoga with the GoNoodle people (it got broadcasted on Periscope). We entered giveaways and got capes, t-shirts, and bags, oh my! We learned about the amazing things Pear Deck is doing. We got fliers for our district from tons of booths.

But the part I was most excited about was getting a chance to win the Grand Prize at the WeVideo Booth. Since I run the Broadcasting Club at my K-8 school, I have been eyeing WeVideo for the past year but we couldn’t afford it. So I found out about their giveaway on Twitter and decided to make sure we went by. Kelsy had never heard of them before. We both entered the contest and on Monday, Kelsy won a class set of WeVideo licenses for her 1st graders. I was so excited for her but kinda bummed that I didn’t get anything. Well, I strongly believe that patience and a good attitude are always rewarded. I went back on Tuesday and I won the grand prize with the green screen, the director's clapboard, Storyboard notebook, and tons of stickers and pens. I was sooooo excited! My Broadcasting Club was also excited to hear about it as well. So it pays off to go to the Expo Hall if you have a specific vendor or program you want to learn more about. A lot of companies also like to unveil new features or updates during ISTE, including GoNoodle and SeeSaw. We also got to play with different types of robots. 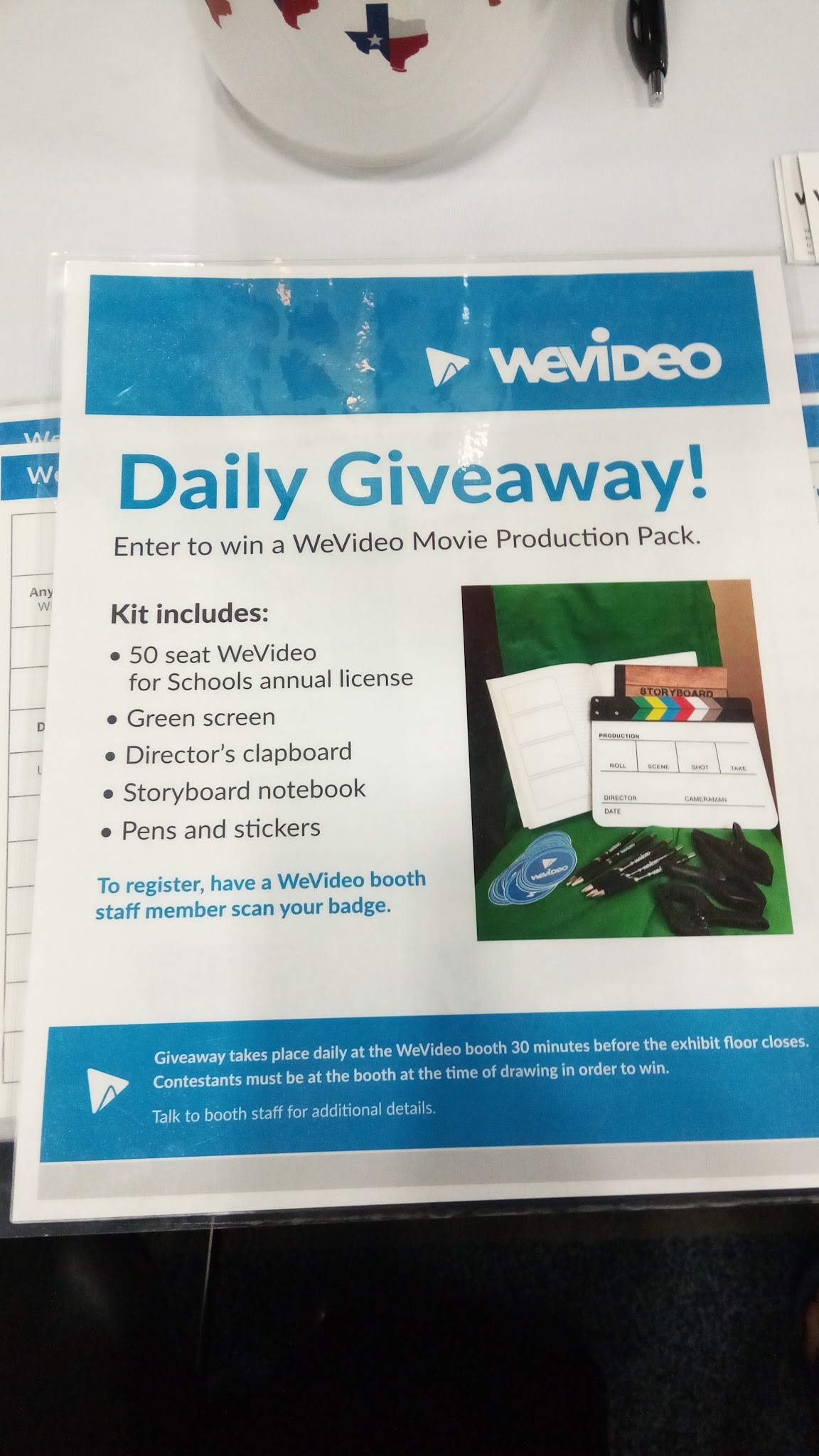 Bonus Tip about the Expo Tip!

One of my favorite things about going to ISTE is that it’s huge so you know that no matter where you are in the city, the people around you might be a teacher attending ISTE as well. One of the newer features of the ISTE app was a feature that allowed you to scan someone else’s name tag and get their information on your phone. We talked to teachers from all over, on the shuttle ride, at restaurants (highly recommend The Republic of Texas pictured below), or even at the airport on the way home. 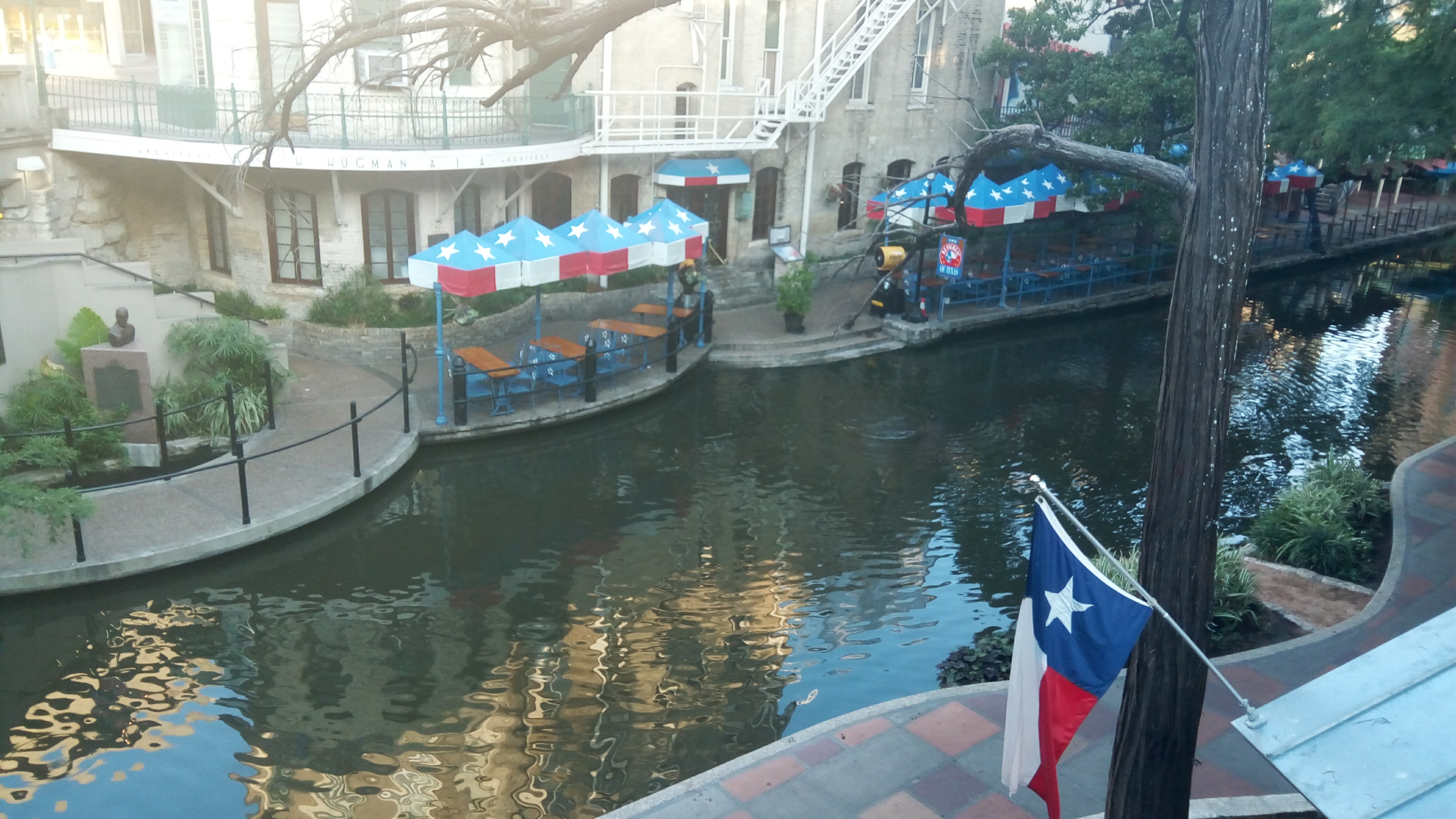 The plane ride on the way to ISTE was hilarious because it was the first plane I’ve taken where there was so much talking. Almost everyone on our flight was going to San Antonio. We took the time to do the Riverwalk Boat tour and met some teachers from Delaware. We told them at the end that it was nice to meet them but we probably wouldn’t see them again. The next day we saw them in our first session! They found us on Twitter and we kept calling each other Delaware River Boat Girls and the Arizona River Boat Girls! Finally, we saw them in the airport waiting to get on their plane while we were getting snacks. It was so fun to meet other like-minded teachers from around the world.

I hope these tips will help you if you are planning on going to #ISTE18 in Chicago. I would love to go again next year. I truly appreciate that my District sent me to ISTE. We had an amazing time. I highly recommend this conference to anyone that loves using technology in their classrooms. If you want to learn a little more about me, check out my about page here!